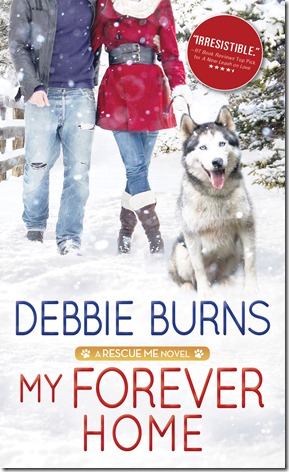 Love comes to the rescue.

Vet school drop-out Tess Grasso dreams of having her own pet therapy business, but she meets one disastrous obstacle after another. There’s no denying she has a way with animals, so in the meantime she puts her skills to use at a local no-kill shelter. Between helping her furry companions and a budding relationship with fellow dog lover Mason Redding, Tess begins to find fresh confidence…

What Tess doesn’t know is that Mason is recovering from an accident, hoping to get back to his pro-baseball career. He’s afraid the truth will ruin everything—and he’s right. But in the midst of hurt and betrayal, a free-spirited stray Husky enters their lives, and teaches them a few things about faith, love and forgiveness.

Tess lifted her mug of tea and carried it into the kitchen and away from the wall of windows and the remarkable St. Louis night skyline. If this were her place, she’d get nothing done in the evenings as she cuddled against that couch, sipping tea, and gazing at the beautiful lights.

“I had no idea a veggie meat loaf could smell so amazing. I’m so hungry, I could eat… Wait, I don’t think you can say you could eat a bear when you’re vegetarian, can you?”

Mason laughed and said she could say whatever she wanted. He was slicing through a cucumber with a gleaming chef knife.

“After we eat, I’ll be good to get back out there and search again.”

“Me, too. I’ve been standing here thinking what it could be like if we succeed. I want the dog. No question. And I know he’ll have a better life. A much better life. But I can’t help but wonder if he’ll want to be here.”

Tess joined Mason at the opposite counter. “He will. I’m sure he will.” Her hand closed reflexively over his forearm in reassurance, and she had to refrain from jerking it away. Seeing his strength was one thing. Feeling it was another.

What would he do if she slid between him and the countertop and allowed her lips to land where they wanted?

She forced a stepped back. “Do you have honey?”

His pantry was relatively uncluttered, and she spotted the honey right away. A family-sized box of Cocoa Puffs on the top shelf made her smile.

“What?” He pulled open a drawer and handed her a spoon. “Are you grinning at my juvenile selection of pantry foods?”

“Aren’t they a kitchen-pantry requirement?”

“I certainly wished that growing up, but not in my house. At least not unless it was a special occasion. My parents both worked full-time when I was growing up, and I went over to my grandparents’ house every day before school. My grandma’s idea of a quick breakfast is a bread roll with butter and jam or day-old biscotti to dip in her coffee.”

“Somehow that doesn’t make you sound deprived, if that’s what you were aiming for.”

Tess laughed as she squeezed a bit of honey into her mug. “How can I help?”

“I’m almost done, thanks. I have a red on the counter and a white in the fridge, if you’re up for wine.”

“Sure.” He pulled a corkscrew from one of the top drawers. “How about you open it while I finish up?”

Mason had a beautiful salad prepared, and a small pot of gravy was warming on the stove. When he opened the oven, she spotted a ceramic bowl of mashed potatoes, another of green beans, and the veggie meat loaf.

As Tess opened the wine, she thought of her grandma. Nonna had taught her never to belittle someone’s effort in the kitchen by equating their work to trouble. “Wow,” she said instead. “Everything looks great. I can’t wait to try it.”

“Thanks. My, uh, slow season is in winter. Cooking is a hobby I’ve wanted to take up for a while. Like I said, before tonight I’d only ever made three different main dishes.”

“You said that, but you didn’t tell me what they are, aside from meat loaf, that is.”

“Want to guess?” Mason grinned as he carried over the salad bowl to a dining table long enough to bring to mind Beauty and the Beast. Mason had set two places, one at an end, the other in the seat adjacent to it. Tess’s heart beat at the intimacy of it.

“Absolutely. Let’s see. You grew up on a farm in rural Iowa, and your family is not Italian, so I’m guessing one of them is not lasagna.”

“You would be correct.”

“Hmm, what’s farmy to cook? I’m trying to picture the Cracker Barrel menu in my head. And before you ask, I only got to eat there when I went to Florida with my cousin’s family on vacation. Okay, let’s see. Chicken and dumplings?”

Mason chuckled. “Nope, though that’s one of my mom’s go-to winter meals.”

“If we were playing hangman, you’d have a head and body.”

Tess clicked her tongue and slid into the open seat next to him. “Pot roast?”

“I bet you hang before you guess the third.”

Tess pierced a bit of salad and silently counted off the meals she’d guessed. “Barbecue ribs?”

“Add the second leg. I can barbecue as well as the next guy, but I wasn’t counting it. Slathering a rack of ribs with some sauce and enjoying a beer while it sizzles over the coals isn’t the same as preparing a meal from scratch.”

“True, I guess.” She pointed her fork his way. “Don’t tell me. I’m going to get this.” She was halfway through a bite of salad when she smacked her palm against the table and hurriedly swallowed. “OMG, I’ve got it. I’ve totally got it. I know your third meal, Mason…” Tess paused. “I know your third meal, but I don’t know your last name. How weird is that?”

Mason sat back in his chair and took a sip of wine, appraising her, his mouth pulled up in the crooked smile that she adored. “With that reaction, this is the all-or-nothing round. Get it right, you win. Get it wrong, that’s the arms, feet, hands, everything, and you’re hanged.”

“I’m okay with that, only what’re we playing for?”

“I don’t know. I haven’t thought about that. Something bigger than who does the dishes, that’s for sure.”

Tess agreed with him. “How about winner calls it?”

His gaze dropped to her mouth for two solid seconds before returning to her eyes. “Yes, definitely.” 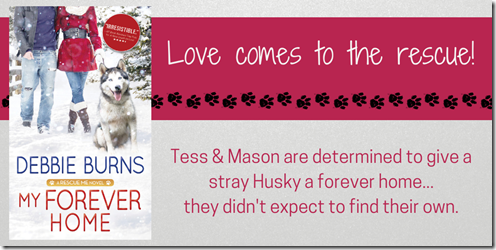 Debbie Burns’ writing commendations include a Starred Review from Publishers Weekly and a Top Pick from RT Book Reviews for A New Leash on Love, as well as first-place awards for short stories, flash fiction, and longer selections. Her hobbies include hiking, gardening, and daydreaming, which, of course, always leads to new story ideas. She lives in St. Louis with her family, two phenomenal rescue dogs, and a somewhat tetchy Maine coon cat who everyone loves anyway.